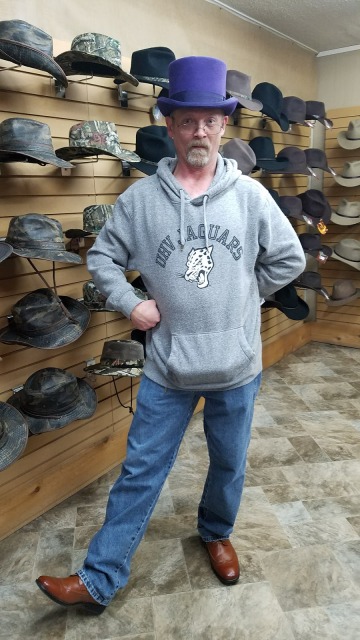 I just wanted to update and say that the Geek Squad did me well. I got my laptop back a day early, and everything I thought I might’ve lost was right there waiting on me when I signed back on. What. A. Relief. In fact, it hasn’t run this well since I first got it, and for all the pages it holds, that’s quite astounding…

I truly couldn’t think of a better picure to go with that header. If that doesn’t scream dorky geekdom right out loud, I’m pretty sure nothing will. From those stylin’ Old Fart wingtips to the distressed university fleece that only nine people on the planet could possibly identity to that perfectly obnoxious Plumb Crazy Purple Willie Wonka Top Hat, it simply doesn’t get any better.
Of couse, to really sell that shit you’ve gotta throw in that smart little Hidey-Ho strut, the White Boy Shuffle, the schottische, something. This particular pose sort of reminds me of the Monopoly Man. you know, the fellow on the game board box with a monocle and a top hat. You won second place in a beauty pageant: Here’s just enough money to go the fuck away (and with any luck, there won’t be enough left for the return trip).
But I couldn’t be happier with the Geeks at moment. I hope to remain so.
And now
martin militia
guide me
lakeside
where the
Muses unleash
ambitious desire and
submerge my soul
in the voices
unearned
liquid  and perfect
my only expanse
buried
deep
deeper still
beyond.