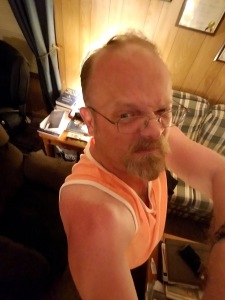 Now before you start calling me a straight up asshole, you’ve got to understand how we two first met. Not that what you might call me matters much. I been called worse. A lot worse. Today, even.
If the boot fits, I always like to say, wear that sumbitch proudly. But how we met says an awful lot to how we’ve put up with each other for so long. It says a lot about what makes us tick, how we view the big wide world around us.
I didn’t know Bubba at all back then. Seen him around the jobsite a few times, but that was it. We worked different crews in different trades. He was a framer, or carpenter to folks outside the business. Me, I’m an electrician. Were it not for landing on the same floor that particular afternoon—and that dumbass kid—I doubt we ever would’ve said word one to each other. It’s kind of a rule on a construction site: You don’t fuck with other crews and they won’t fuck with you. Makes everything a hellova lot easier, most days.

But every crew has its dumbass. This kid was theirs.

I’d seen hands like him a thousand times: This fresh-out-of-the-box, know-it-all little prick who couldn’t keep his yap shut if you paid him. He may know every obscure fact about how the Martians built the pyramids and how his piss-ant wages were single-handedly funding the welfare system—I know this because he told us all about it, all morning long—he still somehow had not yet mastered the fine art of working a tape measure.

Every stud he touched miraculously came up a few inches shy of the wall he needed to build. Such a thing can get downright irritating, enough to make you plumb lose your mind. Believe me, I’ve seen plenty who did. But not Bubba. No sir. He drew that kid in close, tucked him right under those big ol’ dragon wings of his.

“Gawwwlee,” I heard Bubba say, not long after we came back from lunch. “This one’s coming up short, too.”

You’d have sworn he sounded just as perplexed as that kid must’ve been, biting his lip, peering up at Bubba on the ladder. There wasn’t an ounce of meanness in it, just a kindly observation offered in the sweetest granddad baritone. Ol’ Bubba played it up, too, doffing his hat, scrunching his brow, and scratching his big shaggy head like he trying to solve a physics problem.

“Boss is gonna be awful mad if we keep going through lumber like this,” he added in that same sticky sweet drawl. Even from across the building, you could see those words take all the wind out that poor kid. His shoulders slumped. Feet shifted. I almost felt sorry for the little bastard.

Bubba had him right where he wanted.

“I know,” he said, stroking his beard like it dripped answers. “Yeah… That’ll fix it.” He darts his eyes across the room. “Why don’t grab me that ratchet with the big, orange handle out of my box over there?”

The kid lit right up, flitted across the room, and spent the next several minutes rummaging through the heaps of crap Bubba kept in his big green chest. Meanwhile, Bubba climbed down and started measuring out the correct dimensions for his walls.

“Orange handle, you say?” I heard the kid say, echoing inside the box, head down, ass in the air.

“Dadgumit! That’s right,” Bubba said. “I loaned it to one of the electricians earlier this week. Why don’t you go grab it from them? Tell them I sent you to get my board stretcher back.”

That kid sprang up on a mission and trotted right for me. “Don’t suppose you might know who borrowed Bubba’s board stretcher, do you?” he asked.

I ain’t gonna lie. I had hard time keeping a straight face. Bubba’s doubled over laughing in the back of my line of sight wasn’t helping, either.

“I think Larry Carver did, just after the safety meeting earlier this week. You ought to check with him. I think he’s working on the sixth floor today. Yeah, you probably ought to go ask him.”

Now, let’s ignore the fact we were standing in the basement and I just sent this kid up seven flights of stairs. Let’s ignore the fact, too, that Larry remembered Chuck using the board stretcher last and sent him back down another six flights of stairs to find him. Or that Chuck, upon hearing why he needed such a fool thing in the first place, decided another fellow probably had an even better tool for the job: “Go find Jamal. He was working on the roof yesterday, but he’s the only one I know who has what you need. Tell him Chuck said to let you use his a 14-inch pantalón snake. Now that part is critical. It’s gotta be the fourteen incher. Anything smaller just won’t get the job done.”

That kid must have spent the better part of the afternoon on this snipe hunt before the big boss of the job finally sent him home. I sure wasn’t losing any sleep over it, yet the bossman gave us all a stern talkin’ to at the next safety meeting. The dangers of pranking somebody on a jobsite, or some such

I sure as hell couldn’t tell you. We were still drunk from the night before, Bubba and me both, but we were becoming fast friends. . .