I was one of several hundred volunteers from around San Marcos and what was then SOUTHWEST Texas State University who pitched in to help build the roughly half-acre children’s play area in San Marcos that came to called, simply, Playscape. 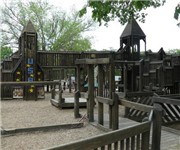 I hardly claim to know diddly about who did what to whom and for how much: I was blissfully content being invisible right about then. Just as soon stay buried, in fact, under about foot of soil, completely unnoticed. I remember a buddy telling me about it a couple days earlier. I sure wasn’t planning on doing any actual work. I was just curious about I might’ve come. And with not much happening that particular morning (or what little was left of morning, anyway), I decided I’d swing by, check it out, maybe.

It was about noon by the time I got there. Folks were munching sandwiches, blankets spread on the grass like an old-fashioned picnic. Some dude had brought a guitar. He strummed, over under the tree, while this chick who looked and sounded an awful lot like Janis Joplin was busy giving us her rendition of Tracy Chapman. It didn’t sound half bad, actually.

Just bits and piece were up, here or there. Almost looked like everybody was building their own separate forts so they had something to hide behind when the dirt clod wars began. The more I looked around, though, the more bodies I saw. Good, I thought, I can get outa pretty quick. They got plenty help. Besides, dude who told me about this never showed up. I’m going to get while getting’s–

I’ll be damned if they didn’t put my ass to work somehow. Before I knew it, I’m holding something in place while another fella ran a drill, jogging over measurements to the dude on the saw, helping unload a pile of fresh lumber when this truck pulled up hauling this big white trailer.

Some old dude came and chewed on me a bit after the truck pulled away. I thought I’d been rather efficient, shoved the pile off rather screwing around board by board. Yeah, it looked like a giant version of pick up sticks, but it wasn’t still sitting trailer, either. Told me that wood I dumped, I needed to “restack it neat.” Whatever that meant. Who’s he think he is? The boss or something?

He went on to say something about how I was gonna “bend the boards” or some crap. Yeah, right. He obviously mistook me some kind of idiot. (Turns out he actually WAS talking to some kind of idiot, come to find out, because I later learned exactly what he meant when I ignored his advice a second time, tossing another pile on the ground, only come back day later and find a couple 2x4s that looked more like some Bavarian pretzel twist than a board.)

We wound up using the twisty pieces as supports as we started taking the stuff we built and starting making it vertical. They were pretty useless as far as boards go, otherwise. You couldn’t have got them flat again with Abrams tank parked on it. Besides, somebody told me they were GIVING us the wood and stuff anyway. No point losing any sleep over free wood, right?

Truly amazing the dumbass thoughts that run through your head when you’re 19. Turns out the old guy–the dude who was all of half my age now–actually was the boss. He and this other guy were the only ones there with contractor’s licenses, which we needed for code and safety reasons. His job was to make sure we employ best practice, and that we all went home in one piece. I remember spending most of that week calling a prick under my breath. Truth is, he probably taught me more about building stuff in those six days than I’d learn for at least another two decades.

It took us about a week, working all day, but when we finished, it was one of the largest and most creative things of it’s kind anyplace, complete with towers and tunnels and swinging footbridges, hand rings and ladders, swings and spy glasses. It had things you could crawl up, on, through, into, over and beyond.

And true to my 19 years, I was still a kid at heart. We all were, really. You couldn’t help but be. Not on that build site. Every inch of it, designed–no, dreamed up–by people right there, with more imagination than know-how, watching, childlike, as the stuff of dreams actually came to life.

And every inch of the place was examined and rethought as we went. What started as castle spires, for instance, with a lofty spot for the king and his crown, when viewed from the backside, actually looked more like an old pirate ship from that angle. Why there’s one of those big captain’s wheels on the back wall of the throne room, and why a rope swing hangs just beyond in ready reach of any marauding buccaneers trying to board yer vessel. ARRG!

The more we looked at everything the more possibilities we realized, and more strange accoutrements we’d attach, just to embellish our visions. I’ll admit some it was just gilding the lily after a certain point, but man you should’ve seen those take to it once they got going, swashbuckling musketeers out one side; Gilligan and Maryjane the other; Shaggy and Scooby in the Mystery Machine down below, The Rescue Rangers, Chip and Dale, if they tip-toed across the railing.

I read last week that the city, after 26 years, had begun dismantling the structure we built back when. Seems some of wood we used had finally given way to too many yesterdays. I only hope it doesn’t get replaced by some bolt-together, prefabricated crap, installed by some city crews more focused on following some preprinted plans written in nine languages, in China, and none of them well.

Sadly, I know plenty from my crowd–ones who helped on that first version–who just aren’t around anymore. Cancers and car crashes, choking to death on all the healthy granola they tried suck down at some point. I knew some, personally, who just went to sleep and never again saw the light of day.

Those of us still here: There’s no doubt we probably COULD get in there let loose with those imaginations once more. But I’d urge you sit this one out.

We set out OUR bar awfully high, I think. Even if they did take it down now. Do you think the kids today, no older than we were then, might actually take up the mantle and make it their own, show up all us old farts? Or are they content with just ordinary. Average. I know we weren’t…

I remember these going up, the dragon and swirly-do, in what seems a short 26 years ago now. How time flies when you’re getting old…