Yesterday you met our good buddy Doug, who had a bit of a potty mouth, a bit of a problem with his neighbor, and a bit of a tussle in the yard. With a cop. A real cop, it turned out, not just one of those Rent-A-Cop wannabes like at the mall. Doug just assumed, you know, especially when the fellow showed up in one those annoying little carts and looked every bit of twelve. It was an assumption that ended with Doug chewing his own lawn, ruining his best Hawaiian shirt, and getting a free ride to the pokey. It couldn’t possibly get any wor– Wait a minute! Isn’t that how all this started in the first place? 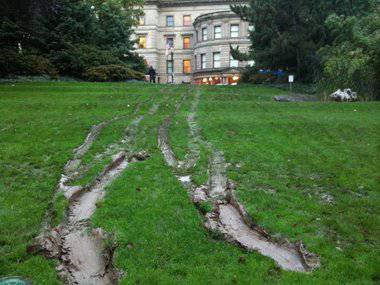 “I always told you that temper of yours was gonna get you in trouble one of these days,” Maggie says, steering the Suburban like it was her first time behind the wheel. “I guess now you’ll listen.”

After spending the night in a holding cell with two drunks and a drug dealer, one of them a puker, Doug didn’t have the energy to respond.

“I had to sell your boat to get you out of there, you know,” she says.

Damn woman. She’d been on his ass ever since he bought that thing ten years ago. She was just itching for the slightest reason to get rid of it.

“How you manage to sell it so fast?”

“Apparently, our neighbor Bob’s friend Lewis has been eying that thing for months now. He was more than happy to help us out in our time of need.”

“Yeah, it seems after they hauled you and Clancy off yesterday, the policemen found drugs all over the ground just outside the crashed car. Bob had no idea how they got there, of course, so they assumed they must be yours…”

Inspecting the damage, the morning after, Doug cursed plenty after seeing the bits white rock strewn all over his previously immaculate yard. He shouted at his neighbor’s house, pumping his fist, recognizing his car instantly, only to watch as the mini-blinds to the living slowly drew to close. Bob wouldn’t set foot out his place until nearly supper time, and even then, he looked like hell: Eyes blood shot, color all wrong, hair like he just woke up. That’s when that bullshit nephew story got started, Bob promising to see to the damages at first light next day. Of course, Doug spared no detail in giving Bob every blessed piece of his mind (or as Doug had it, his “due and rightful ass-chewing”), especially now that Bob had given him all day to work out the proper intonations on his soliloquy. One thing Doug didn’t do, however, was sort the rocks of crack cocaine from the countless bits and fragments of limestone in his yard. Not that he would have known one from the other. The cops sure did, though. Doug about dropped dead when he was informed of his bail.

“Well, seeing how his registration went out of date last week and he was now considered a nuisance animal, they put him to sleep yesterday,” his wife says. “Besides, with the hole in our fence, we didn’t have what the authorities felt was a secure enclosure for such an animal anyway.”

Maggie always hated that dog, almost as much as the boat.

Fairly certain this ordeal couldn’t get much worse, Doug gazed out the passenger’s window, smoldering and silent, only to be proven wrong once more, as Maggie rounded the corner.

“For letting that registration lapse,” she said, straightening the wheel. “You owe a $500 fine to the city, plus another $1,000 for the nuisance animal charge. And I got a letter this morning from the homeowners association saying we owe $50 per day for every day our yard stays in the shambles it’s in. We’ve already racked up a $150 bill with them.”

Someone in the association said they’d seen the wreckage on the way home from church choir practice at 11:35 p.m., the night it showed up there, Doug having long gone to sleep already. Pfff. Can you believe that? Choir practice, of all things. At that time of day, no less. Some people…

And for 25 lousy minutes, he now owed $50 more, when Bob swore he was take care of the problem. First light. Yeah, right. Payable to Bob’s wife, the association treasurer, of course.

Doug’s stomach sank even more when he rode past his house. His yard was straight out of a Greek goddam tragedy. Bob’s Buick was finally gone, but it like they used about forty-five eighteen wheelers yanking it out, each one of them cutting a new set jagged ruts across what could’ve passed for golfer’s green before all this. Heaven forbid any make use of the tracks already there. Plus, those ruts—nearly a foot deep in places, all them now scabbing over gray as the mud had dried in Doug’s absence, now extended all across the back yard as well. Judging from the tracks back there, Bob’s friend Lewis certainly wasted no time getting that boat, nor waiting on someone to fetch the keys to the gate that opened to the packed pea gravel road Doug built leading up to it. Instead, Lewis had driven through the gaping in his fence on the other side of his house, and from looks of it, had get another involved back there after he got stuck the third time.

This was gonna require profession help and lots of it. Doug wanted to cry.

“Thank God Lewis is an attorney,” Maggie says. “I hired him to represent you on the drug charge. He sounded pretty confident he could possibly get the charges lowered.”

“Lowered? But that wasn’t even mine…”

“That’s exactly what Mary Sue said you’d say,” Margaret says. “She’s a drug counselor, you know, lives a block down from us. She told every one of her clients always tries to deny they have any sort of problem at all. You wouldn’t believe some of the stories she’s heard. Admitting you have a problem is always the first step, when it comes to things like these…”

“Now you listen here, mister. That nice young officer said he had to physically restrain you last week during what should’ve been a routine call. No one acts like that unless they’re hopped up on something. Mary Sue said she would happily get you into one of her programs, plus Lewis says that would go a long way in helping your defense.”

Doug sat, his wind entirely gone, as they pulled into the drive. If he owned a gun, he would gladly used it about then. On his own eyeball, on every sorry son-of-bitch on his block, and most especially, on his chauffeur.

It was going to be a long summer…